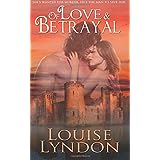 26 thoughts on “Interview with Louise Lyndon”