If you’re out walking at night in the fictional 18th Century coastal town of King’s Harbour, England, beware the owl hoot. Perhaps it’s just an owl, but it could be a member of the notorious Hawkhurst Gang.  Suddenly the fog rolls up from the English Channel and throws its cold wool blanket over you, and the only way to get home is to feel your way.

Midwife Maggie Wilson, heroine of Mercy of the Moon, Book #1, has some sage advice for you: the less you know about the smugglers, the better.

Travelling is a source of great inspiration for writers, and this month I’ll be talking about travel.

Several years ago, I visited the town of Rye, England, an important port town for centuries. Late one night, I stood alone in the middle of ancient  Mermaid Street, cool air from the English Channel misting my skin. My pulsed raced as the timelessness of the place took hold of my soul; it could’ve been 1300, 1500, or 1700. Long after I went home, the moment stayed with me, and the setting for my Rhythm of the Moon series was born. The more research I did on the charming town, the more the ideas flowed.

Owl hoots could be a signal from a member of the Hawkhurst Gang, a group of notorious smugglers in southeast England in the 18th Century. That’s the way they communicate. No matter how many times Maggie sees them during her nighttime baby calls, she’ll never get used to the glimpses of the men with the bee skeps over their head, holes cut out for eyes, carrying a signal lantern in one hand and a gun in the other. Turn the other way, and speak to no one about it!

Although King’s Harbour is a fictional town, the Hawkhurst Gang was very real. Thanks to research help from Jo Kirkham, and the Rye Museum in Rye in England, I learned that the smugglers donned man made bee hives, with holes cut for eyes, and communicated with owl hoots when on a smuggling escapade.

Smuggling was very common, and important for the economy of the coastal towns, but the Hawkhurst Gang did more than their fair share of nefarious deeds. If you’d like to learn more about the fascinating Cinque Port town of Rye (my inspiration for the setting) or the smugglers,  visit http://www.ryemuseum.co.uk/

You might ask yourself how the Hawkhurst Gang figures into the plot of Mercy of the Moon.

There’s only one way to find out.

Stay tuned for some fun blogs about travelling in far-flung places. What locale inspires you? 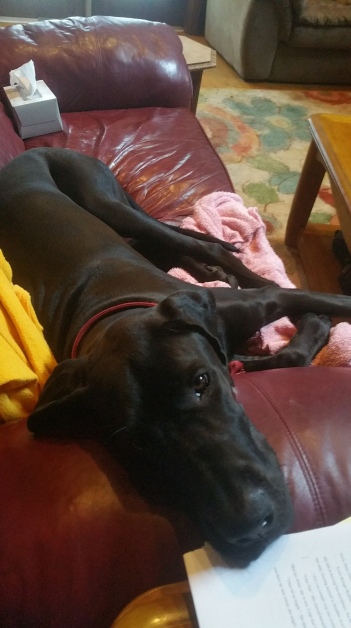 Poor Bridget. The world is a sad, sad place. If you look very closely, you can see one tear at the corner of her eye.  Every fiber of her being is Waxing Lachrymose. This is a term I first heard years and years ago, when I read Wuthering Heights for the first time. Bridget is milking her sorrow for all it’s worth; because it’s raining,she can’t go outside while I work on my edits.

Someone who is Waxing Lachrymose is given to shedding tears. Even just saying it to myself with great emotion is so satisfying. I imagine different scenarios for you to use this great phrase:

You Wax Lachrymose at the office, after the boss dumps a pile of work on your desk.

After a disastrous football game, your son tells his teammates: “Don’t Wax Lachrymose, fellas, we’ll do better next week.”

You say to the shoe salesman, after learning he’s out of your shoe size: “Dang it! I’m going to Wax Lachrymose all over you.”

You get the idea. Imagine how much more intelligent we’d sound if we used this phrase. Instead of road rage, how about if we just roll down the window and yell, “Waxing Lachrymose at you, Sir!”

I challenge you to use this word today in your daily life. Leave me a comment and let me know how it went. Spread the word.

What A Word Wednesday Entry #1

I write historical romance set in the 18th Century, so I collect words like some people collect wine corks. Yes, I get a word of the day from dictionary.com.  Truly, I never thought I’d get a chance to use the word, “Ninnyhammer,” but how lucky my Great Dane Bridget is a-I can’t say bright-shining example of “Ninnyhammer,” which means, “a fool, or simpleton.”

My nine month old puppy (much like a teenager) tends to get into trouble if given too much freedom. And somehow she’s gotten the idea she’s the Queen B around here. Last Wednesday, I was getting ready to leave for a book signing at a Panera’s. I actually had real clothes on, i.e., clothes for the outside world, and had even put big girl makeup on, with special attention to the under eye bags, caused from a week of heavy galley-reading.

I had this naive idea that if I put Queen B out in the paddock, she would puppy zoom and wear herself out. But as it turns out, I spent a good twenty minutes chasing her in my nice shoes, trying to get her to come, and wearing myself out. It’s a super fun game for her, and an exercise in futility, once she gets her zoom on. Needless to say, “Ninnyhammer”  was not one of the words I called her at that time.

Now, I have her to thank for giving me the chance to bring a word back that’s been around since the 16th Century, and for sparking the idea for a blog post.

How many times in the course of a day can you use the word, “Ninnyhammer“? How about confounding your office staff, your boss, your employees? Your children? There are tons of words in the English language that we never use–let’s rediscover those old words,  together! I’ll be catching you again with a fun word every couple of weeks on What A Word Wednesday.

BREECHES AND OTHER 18TH CENTURY DELIGHTS

You might wonder why I set my historical romance, Mercy of the Moon, in the 18th Century. One word–breeches. Have you ever seen Russell Crowe in Master and Commander: The Far Side of the World?

Let me tell you straight off that I’m not an expert on 18th Century fashion; I just find it fascinating. My trusty Oxford American English dictionary defines breeches as, “short trousers fastened just below the knee . . .” Breeches fit nice and snug on various parts of the male body. A woman may or may not get a peek of the gluteus maximus, via the slits in the waistcoat. A  lady can only hope. You see, men’s clothing in those days was a little more …flattering, allowing the men to display a muscular calf to advantage, at the very least.  The hair, now that’s a different story.

I’ve heard people say we are more narcissistic  these days, with all the plastic surgeries and money spent on makeup, creams, and so on. Nowadays, even men get face lifts, calf implants and butt lifts. Clearly, vanity wasn’t invented in the 21st century.  Woman and men were vain even back in the 1700’s.  Look at Marie Antoinette and King Louis the XVI.

Even men less pedigreed than King Louis were fashion conscious. There was a trendy group of fellows who called themselves “macaronis.” As a kid, I’d heard “Yankee Doodle,” and was always puzzled about the “stuck a feather in his cap and called it macaroni” line. Come again? Why don’t you just call a feather a feather?  Years later, I discovered that “macaroni” was an 18th Century word used to describe a feather-in-the-hat-wearing fashion conscious British dandy who liked to put on foreign airs, not something you mixed with cheese.

My hero, Ian Pierce, has his mind on other things besides fashion, like  midwife Maggie Wilson. He is well-travelled, and had a couple of suits made in the Far East, where he was in search of…well, that’s another story. He had to dress up to perform at the courts of King George II and King Louis the XV. Ian has great presence, with his wide shoulders, long legs and endless vitality that midwife Maggie finds so mesmerizing.

People in that century weren’t much different than we are, really. They too wanted to be admired, cherished, and loved, despite the lack of modern dentistry, sanitary conditions or medical advances. Men are men, and we women, no matter the time period, fall in love with them whether they’re wearing breeches, khakis, or kilts.